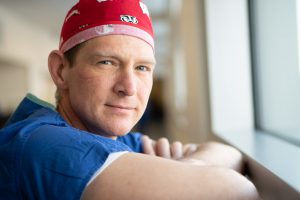 His study, “Epigenetically reprogrammed synovial fluid-derived mesenchymal stem cells demonstrate enhanced therapeutic potential for treatment of chondral disease,” was one of only 15 selected internationally, and only two that involved cartilage repair, from a field of over 2,000 submitted abstracts. Co-authors include Hongli Jiao, PhD; Ming-Song Lee, MS; and Wan-Ju Li, PhD.

This was a remarkable accomplishment, says Wan-Ju Li, associate professor of orthopedics and rehabilitation, biomedical engineering and head of the SCRMC Musculoskeletal Regeneration Scientific Focus Group,

“This is a highly competitive award recognizing young investigators and their outstanding work,” Li says. ”Through Brian’s promising work, we hope to make a difference for the millions of people who need relief from the pain and disability of degenerative cartilage disease. This joint disorder has become a major health concern in our society and the only option available is joint replacement with metal/plastic protheses.”

With Li as his mentor, Walczak has succeeded in regenerating cartilage by injecting reprogrammed human mesenchymal stem cells (MSCs) and implanting them into guinea pig joints. This is a promising preclinical step to advancing stem cell-based treatments for osteoarthritis.

Walczak has seen his share of cartilage injuries, especially as the team physician for the UW Badger men’s hockey team. His clinical focus as a UW Health doctor of orthopedics and rehabilitation is hip preservation, knee and shoulder arthroscopy, and cartilage restoration.

“We are a big cartilage transplant center here, using plugs of cartilage from donors,” Walczak said in a recent SCRMC seminar, “but the grafting techniques damage cartilage and the shelf life of the grafts is not very long, plus it is a few weeks of difficult, invasive procedures.”

“Osteoarthritis is a complex, degenerative process involving the interaction of several tissues,” he added. “We are working toward a minimally invasive procedure involving the cellular reprogramming of MSCs derived from fluid near the joint itself.”

The procedure would be less invasive than a bone marrow biopsy or fat aspiration as the source of the MSCs. Once derived and then reprogrammed, the research team observed, the cells grow very well in culture, even better than cells from natural cartilage. They also grafted well into the Guinea pig joints.

“We found a striking restoration of cartilage,” Walczak said.

Directly injected MSCs have shown evidence of reducing pain and inflammation in both animal and human studies, but they may not be the appropriate cell type for regenerating cartilage necessary to repair actual joint damage.

“On top of that, you can’t just inject stem cells directly into joints to repair cartilage, because their quality varies from patient to patient, leading to inconsistent therapeutic outcomes,” Walczak emphasized. “One way to overcome this issue is to reprogram them. It’s complicated but it’s necessary.”

Walczak closed his talk by thanking Wan-Ju Li for his mentorship and research resources and also acknowledging Igor Slukvin, SCRMC faculty member and professor of pathology and laboratory medicine for his technical support.

“Wan-Ju has been a great supporter and mentor of my work,” said Walczak, who is training with Li through the UW Institute for Clinical and Translational Research. “He allows me to function as both a surgeon and a basic scientific researcher.”