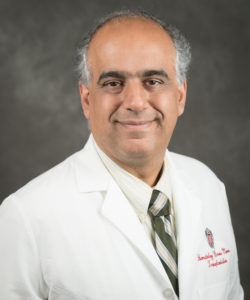 By Josh Knackert (as published in the SCRMC Fall 2016 newsletter)

UW-Madison’s Stem Cell and Regenerative Medicine Center brings together faculty members involved in all phases of science, from basic science by chemists working on new cell culture platforms to research by doctors running clinical trials to test new types of cellular therapies for cancer patients. Finding new ways to collaborate across disciplines is paramount, as the amount of time that passes between basic research discoveries and the widespread use of resulting therapies in patients can be very long. Those years or even decades spent to move basic discoveries from the bench to clinical applications at the bedside are aptly referred to as translational research.

More than 100 attendees at the SCRMC’s 2016 Fall Conference Sept. 30 in the Discovery Building listened attentively to a talk on the challenging field of translational research by SCRMC member Peiman Hematti. M.D., professor of hematology and oncology in the UW-Madison School of Medicine and Public Health (SMPH). Through his roles as a basic, translational, and clinical researcher, Hematti experiences firsthand the promise and payoff of biomedical research. As medical director of the Hematopoetic Cell Collection facility and also director of the Clinical Cell Processing Laboratory at the UW Hospital, he oversees all blood and bone marrow collections and processing used for treatment of blood cancers like leukemia, among other disorders, at the UW Hospital. Through interactions with patients and fellow clinicians, he can identify areas for improvement in the current therapies. Importantly, as a researcher, he uses this knowledge to direct continuing research in his lab.

A standard cellular therapy for leukemia involves isolation of bone marrow stem cells from a person other than the patient, which causes the cells to be seen as foreign by the recipient’s immune system and could lead to their rejection. However, a much bigger drawback is a potential immune response in the recipient triggered by these foreign cells and called graft versus host disease (GVHD). Even with the latest in immunosuppressive drugs, GVHD still happens in the majority of patients, further complicating their treatment and recovery.

Much of the research in the Hematti lab involves manipulating the power of immune cells to modulate this unwanted immune reaction, as well as facilitate tissue repair. Hematti and collaborators within the SCRMC and the SMPH are working to engineer cell transplants to prevent or treat GVHD as well as repair damaged tissue in other organs such as the heart. Research of this nature, which holds promise in helping treat human diseases, needs to be complemented by translational research and then tested in clinical trials.

In his talk, Hematti described basic research and clinical research as being two sides of a cliff separated by a large canyon; translational research builds the bridge between these two sides. As with physical bridges, those of us benefiting from translational research often do not realize the planning, sacrifice, and time involved. Translational research also suffers from a lack of funding, as much of it necessitates more complex and expensive preclinical studies involving large animals that more closely model human physiology, such as monkeys, as opposed to basic lab studies with worms, zebrafish, or mice. Thus, most of the biggest research grant providers focus their efforts and resources on one side of the canyon or the other. “Closing the funding gap for translational research is paramount in bringing discoveries to the clinic faster and more efficiently,” Hematti conveyed. He has observed a recent increased emphasis on translational research from the National Institutes of Health and is optimistic that funding will follow suit. However, he stressed that the most important prerequisite for success is still good preliminary basic research.

For the last few years, Hematti has been working with his bone marrow transplant colleagues and UW Hospital to establish the first Good Manufacturing Practice (GMP) lab in the hospital, as part of the Bone Marrow Transplant (BMT) Clinical Cell Processing Lab. Cells produced in a GMP facility adhere to increased levels of regulation and quality control. This GMP facility would offer investigators throughout the university a new clinical infrastructure to use when they are ready to translate their discoveries from the bench to bedside. Under Hematti’s leadership, the Clinical Cell Processing Laboratory at the UW Hospital has supported a wide variety of novel clinical trials at UW-Madison for more than a decade. The addition of the GMP lab will widen the range of new opportunities for cell therapy on campus.

“If the ultimate goal is to improve human health, a better understanding of translational and clinical phases will inform better basic research,” said Hematti. Bridges are finished much faster when you build from both sides and meet in the middle, but if the two sides don’t communicate, their idea of the middle could be miles apart. He believes that if scientists and clinicians discuss key therapies missing for patients and the current state of science and technologies in the lab, failure rates for new clinical therapies would greatly reduce. He highlighted efforts by the university to foster this kind of communication, including the SCRMC, Waisman Biomanufacturing, and the UW Institute for Clinical and Translational Research (ICTR), lauding the UW for being a strong advocate for translational research.

While Dr. Hematti provided an insightful look into the challenges of translational research in his talk, he also articulated its immense benefits and promise. The bone marrow transplant based therapies and treatments offered today are possible only after decades of basic, translational, and clinical research stretching all the way back to the post WWII era. His hope is that through increased funding, communication, and infrastructure, better translational research will help bring more cellular therapies to the clinic, thus helping the ultimate goal of saving and bettering lives.

Some examples of Hematti’s and colleagues’ published translational research efforts follow, along with his comments:

“Nonhuman primates are considered essential for translating basic research discoveries into the clinic. This study was the first to show efficacy of AMD3100 in mobilization of true hematopoietic stem cells in a large animal model. A few years after this publication this drug was approved by FDA for use in patients.”

“Macrophages play a major role in mediating the beneficial effects of mesenchymal stem cells. This publication has received enough citations to be place it in the top 1% of the academic field of Clinical Medicine by Web of Science.” (Hematti has two patents already issued based on this work.)

“This study is an example of collaborative effort between a cardiologist-scientist – Dr. Amish Raval, as Principal Investigator and Investigational New Drug (IND) holder – and our clinical BMT Cell Processing Lab, which successfully helped advance this bench-to-bedside effort.” 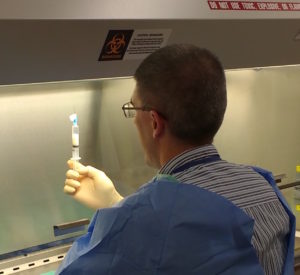 Kreg Grindle, a senior medical technician in the Clinical Cell Processing Laboratory at UW Hospital, prepares a product for transplantation into a patient enrolled in a clinical trial. (Image courtesy of P. Hematti)

Photo of Dr. Hematti above courtesy School of Medicine and Public Health, UW-Madison.