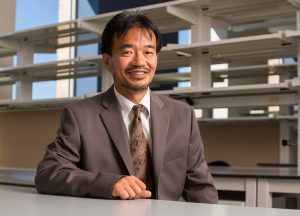 Our research is focused on identifying genetic factors involved in development and homeostasis of tissues including retina, brain, skin, and heart. In general, our studies utilize a forward genetic approach, beginning with mouse mutants that manifest phenotypes of interest. A major advantage of this phenotype-driven approach is that it offers the potential of identifying previously unknown genes and molecular pathways that regulate a process of interest. After a gene of interest has been identified, we aim to unravel the pathway by which it normally acts whose disruption results in the observed phenotype. One major approach we use in dissecting these pathways is to identify genetic modifiers that interact with the original mutation indicating that they are likely to be affecting other components in the same pathway. In this way, we can expand beyond the original mutation to obtain additional entry points into the same pathway and allow a more complete understanding of the molecular pathways that underlie the phenotypes. Recently, we identified a mutation in the Tmem135 gene of mice showing retinal degeneration and inflammation. We also identified that TMEM135 is involved in mitochondrial dynamics. We are particularly interested in studying how mitochondrial dynamics are critical for cellular homeostasis and development.